Pickford was one of the most fun and satisfying patterns I’ve designed. Back in November, I started noodling around with the idea of a bandana cowl. Looking around at Ravelry at some of my favorite designs like Zuzu’s Petals and Starshower, I was surprised at the construction; they all start by knitting flat, then joining for knitting in the round once the shawl-in-progress is wide enough to fit comfortably around the neck. This creates basically shawls that  are fastened in the back, which is exactly what they were going for.

That construction creates a shawl-like project that starts low on the neck and lies flatter on the chest. My neck is always cold and feels vulnerable, so I wanted my design to go up a little higher, keeping the neck warm, but not being tight. Even though I like my neck warm, I can’t stand anything tight, which makes me odd, I know.

Starting from a cowl construction instead of a shawl construction seemed like the best angle, and would be much simpler to knit. But it needed to get wider at the bottom for comfort and to create the bandana shape I wanted.

The first iteration of the pattern featured increases at the “point” every round, which made it pontier. I liked that one, and it’ll be coming out as a new pattern soon, but I wanted to try something subtler (if you visited us at Vogue Knitting Live New York, it was a sample in the Impressionist section of the booth). The next try increased every other round, and I liked that, too, (it’s the Over the Rainbow cowl I wear pretty much every day, and at the Knitting Pipeline Retreat), but the Pickford version made just the bandana cowl shape I envisioned for a worsted-weight cowl.

This created just the warm, yet drapey and easy-to-knit cowl I had hoped for all along! 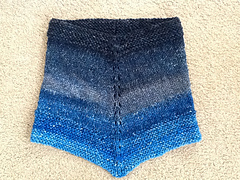 Test knitter Alane made a darling Pickford  and gave me excellent pattern feedback. Thanks, Alane!

I love this construction so much, I’ve already got a lacy spring version on the needles. I hope you enjoy it, too!