I’ve got so much that’s new and exciting to share with you! it’s hard to know where to start.

First, and very big news to us: we have our own Knitcircus Yarns web store now! You can purchase 100g Gradients, 150g Gradients, Matching Socks Sets and Gradient Stripes Socks right from our site now. Whooo! Big props to Webmistress Cindy for her hard work getting it all prepared for you.

The new Gradient Stripes socks are flying off of our virtual shelves, and I’m dyeing them up as quickly as I can so that you can start playing with them! We sent many, many packages out the door in the last two days, so if you live nearby, you may have your sock sets in hand soon! More are heading out today because we really want you to be able to knit with them.

We can’t wait to see what you’re knitting, so we’ve started a KAL in the Knitcircus Group to bring everyone together to share and enjoy progress on their Gradient Stripes socks. We’ll have weekly prizes and surprises, and Webmistress Cindy is putting together a list of good sock patterns to use. Just post progress pics in the progress thread to be eligible to win! Note: if you would like to work the KAL with original Matching Socks Sets gradients, of course you can!

Webmistress Cindy has already knitted most of her first sock! She knits fast. She’s using a prototype for the Sand Castle colorway that has a little less contrast in the blue section than the for-sale colorway will. 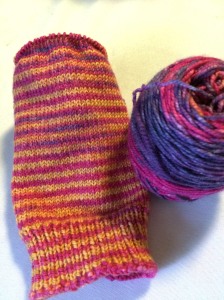 Susie Anderson’s finished sock so intrigued me that I wanted to try the Tropical Sunset colorway for myself.

Speaking of Susan B Anderson, she’s doing a fun giveaway on her blog right now, in fact, two giveaways for the new Gradient Stripes Socks! She talks about the yarns and shows her finished sock on her video podcast, and has a really creative idea for the giveaways. It’s so fun that she’s doing videocasts now, because Susie’s personality just shines and she’s one of the dearest people I know. I’m so lucky to live near her, but now knitters in far-flung places get to be charmed by her, too!

In kid news, Lil Buddy’s fall baseball season wrapped up; unfortunately, he hurt his hand right before the last day of play, but still had a blast with his fall tournament team. What a talented and fun bunch of kids.The World Series starts next week, so that will be the last hurrah. I can’t wait to make the traditional homemade caramel corn….

It warms the cockles of my heart that he still wears my handknits in public; above he’s sporting two-years-ago’s Gryffindor hat. 🙂 Belle has a new hat, a variation on the Valentina I made for her last year, but I haven’t gotten to snap a pic yet. 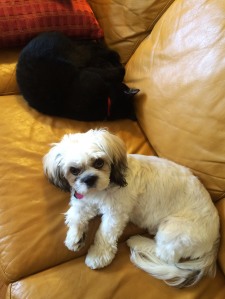 Of course, I couldn’t have a blog post without including some cute pet pics! Sasha and Squeak are good friends and enjoy napping together when they’ve worn themselves out chasing and play-fighting.