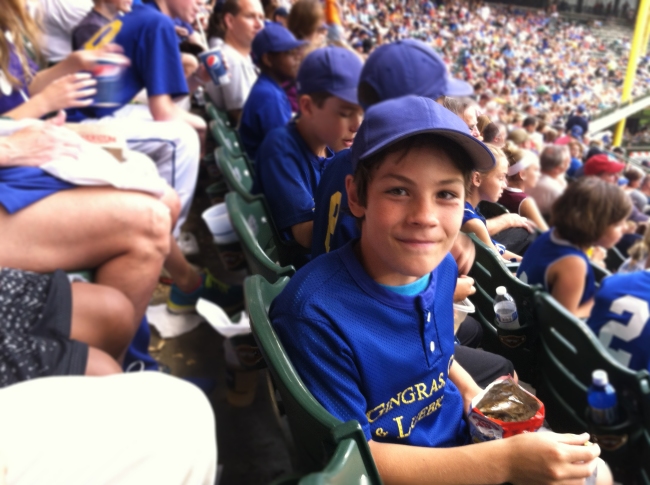 Li’l Buddy at the Brewers game

I’ll just come out and say it; my kid made the Little League All-Stars team. Every year, he’s played Little League and always loved it. Last year, his team even made the Championship Game for their league, and we thought that was the most exciting development ever. But this year, the kids voted on who should try out for All-Stars, and our Li’l Buddy was lucky enough to make it. Suddenly, this whole world of tournament play opened up out of nowhere. All-Stars isn’t just one game, like in the big leagues, it’s a whole separate team with its own season. Forty days and forty nights of baseball.

At least at West Madison, the kids’ voting is a huge part of the selection process, which seems unfair in some ways (what if your kid just happened to have a really good game that day) but just right in others (it ensures that the All-Stars get along well with their teammates and have good spirit). After watching professional baseball for years, getting used to big egos, it’s been so refreshing to see these talented players eager to help each other. One little guy said to his mom the other day, “I like All-Stars because all of the kids are so nice!”

It was made very clear that a big criteria for making the team is your parents’ willingness to drop everything for baseball on a moment’s notice. All-Stars practice for a couple of hours six days a week, in addition to tournaments and finishing regular season games and playoffs. In fact, the coaches (all volunteers) are so dedicated that they had practice at 7:30 am on July Fourth!

To get the kids’ feet wet in tournament play, the coaches signed them up for a meet which, for administrative reasons, meant that they had to play all of their games in one day. Because they won a game or two they weren’t expected to win, they ended up playing four baseball games in one day. Just a double-header is grueling, so by the end of the day, the kids were almost beyond exhaustion, and all of the parents had bonded with the stress that can only come from watching your kid do something and hoping it goes well over and over and over.

So, I apologize to everyone in the Yarn Clubs and KAL’s, because my reply times are slower. It’s not that I don’t love you, it’s just that there’s a whole lot of baseball going on! 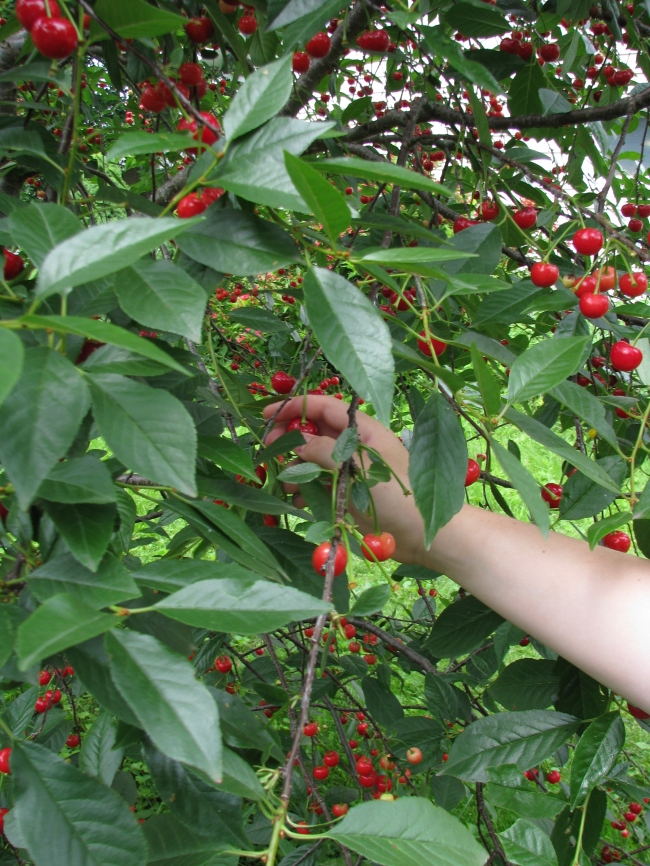 Our little cherry tree just keeps making more fruit! Every year, it impresses me again; I almost can’t believe that one tree can create so many cherries. I feel like we should do something special for it, like throw it a party. 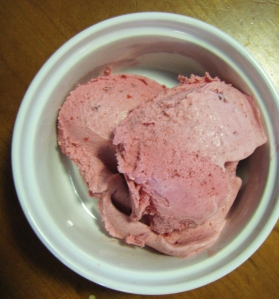 Since pie takes a while, I thought we’d try making Sour Cherry Ice Cream to use some of the bounty.I was planning to use this recipe from Brooklyn Supper, which looks mouthwatering, but was too lazy to cook and chill a custard filling. Then Li’l Buddy suggested milk chocolate chips, so we ended up with our own recipe.

Please note: that batch went so fast I didn’t get a photo of it! For the one shown, we ran out of chocolate chips, so they’re not pictured.

Chop chips until a few chunks remain, but most are pretty small, a little finer than photo shown.Reserve for end.

In large bowl, mix remaining ingredients with a whisk until sugar has dissolved. Add cherry puree and stir until combined.

Pour mixture into ice cream maker and prepare according to machine directions.

When your ice cream is almost finished, pour in chocolate chunks and shavings and run machine until chips are incorporated evenly.