Joss Whedon’s a genius, and after we worked our way through all of the Buffy and Angel episodes, Mike and I decided to give this Firefly series a try. At first, I thought, “Okay, it’s Han Solo with a new crew,” but after one episode, the complex characters hooked me for good.

Recently, I re-watched the show’s 14 episodes all again, and found myself loving the bright, western-style landscapes contrasted with the ship’s beat-up interior all against “the black,” or deep space.

Big, geeky fangirl? Yep, I even have  a couple of Firefly books. Combing through them for “research” on costumes and characters, no trouble at all.

Firefly fans, or Browncoats, are legendary for their passion for such a short-lived show, and have a reputation for helping out charities and the like. So in the Browncoat spirit, for every Still Flying yarn sold, Knitcircus will donate a dollar to Kids Need to read, a group cofounded by Nathan Fillion.

Of course, I’ve got a huge crush on Malcolm Reynolds; who doesn’t? So Captain Tightpants was the first out of the dyepot.

Wash’s Coveralls, based on our favorite wisecracking, dinosaur-playing spaceship pilot. 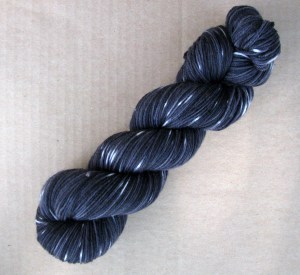 These 14 episodes offer a lot of inspiration, so watch for more Still Flying colors in the nest few weeks, including Truthsome, Registered Companion, Cunning and Real Nice Party.